PUBLISHED IN BALADNA SYRIAN NEWSPAPER. 10 DECEMBER 2009
While the temperature in Copenhagen is little above freezing, the atmosphere at the Bella Center, venue of COP15, is heating up amid confirmations that more than 100 government heads will attend the high-level segment of the conference on 17-18 December to push for an agreement.
The preliminary findings from the World Meteorological Organization (WMO) report, which final version is expected in March, have shocked even the biggest alarmist, with the WMO reporting evidence of global warming. Findings suggest that this year is likely to be ranked as one of the hottest 10 since 1850, and with the current decade being also the hottest on record. 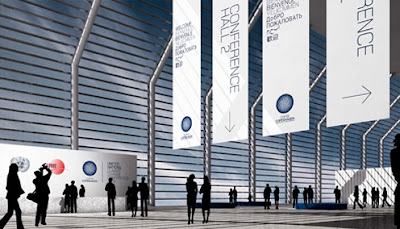 In contrast, however, top leaders remain optimistic following leaks of the expected final text, which has dominated the every day agenda. But differences among the G77, a group of 130 mostly developing countries, including Syria are growing wider on almost all crucial issues, making it increasingly difficult for the climate talks to produce a consensus. A major division within the group is between poor countries and nations with rapidly evolving economies, but interests also vary between countries with and without oil production and countries with and without large forests.
Regardless, Secretary-General Ban Ki-moon optimistically predicted on Tuesday, that a robust agreement to combat climate change will be reached in Copenhagen and implemented immediately. “From all corners of the globe we see unprecedented momentum for a deal,” the UN chief told reporters at UN headquarters. “I’m encouraged and I’m optimistic.”
But leaks in the final text are also playing a role, with the British newspaper “The Guardian” claiming to have an official Danish proposal for a compromise text which “shows deep unease” among G77 block. 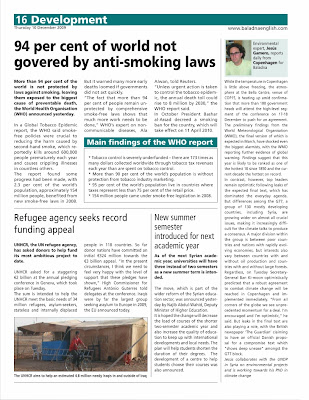 With the America’s Environmental Protection Agency announcing that greenhouse gases are a danger to human health, President Obama has changed his plans for attendance to Copenhagen from the first week of the conference, following his trip to Oslo for tomorrow’s Nobel Prize ceremony, delaying his attendance to the last and decisive days of the conference the 18th of December.
As everything of significance to the treaty is announced late in the meetings, often on the last day, it looks that this change of plans can suggest that a “deal” is already in the bag, and Obama want to be part of a decision and a picture that will mark the beginning of a serious and binding commitment by every world nation in the coming years.
US President ran into office with the clear idea to support green energy in order to cut emissions of heat-trapping gases and reduces the use of fossil fuels, also with the objective to gain energetic independence.
However, Obama’s energetic independence objectives have been considered as unrealistic by Saudis and arguments have been confront by the Islamic Kingdom in order to put aside the President’s rhetoric of energy independence and instead recognize interdependence of energy producers and consumers.
With a position considered for many parties involved in the negotiations as harmful and against the general interest aimed to combat global warming and with a “long history of playing an obstructionist role at climate conferences” Saudi Arabia is one of the main players in COP15. Its influence over the rest of Arab countries, and its importance as the first world oil producer, together with its relation with the United States makes of its position one of the determinant factors for a possible success of the negotiations.
Through a quiet campaign during these and other negotiations, Saudis with its lead negotiator Mohammad Al-Sabban has demand, that oil-producing nations get special financial assistance if a new climate pact calls for substantial reductions in the use of fossil fuels. Specifically, Saudi Arabia wants access to funds within an existing UN scheme dedicated to combat climate change effects considering that “Adaptation is not only to the impact of climate change but also the impact of climate policies.” This position has raised the critics of the least developing countries which considered Saudi position as unfair with those populations that have not the revenues of oil to fight climate change. 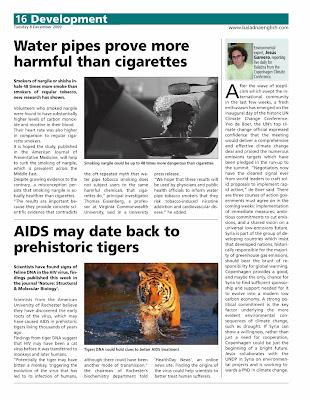