Bella center is a small representation of the world and the mankind. Countries cooperating and arguing, people sharing their fears, dreams, hopes, interests or hates. Economic interests surrounding most of the conversations. Politicians, activists, journalist, celebrities, students, policemen, waiters, cleaners, etc., who care or not about the final result of the Conference.
In the world there also queues, as those since Monday are blocking the Bella Center, with participants just arriving being forced to spend between six to eight hours in registration lines at 0°C. At this stage of the Conference the total number of people requesting accreditation had hit more than 40,000, thus far exceeding the 15,000 capacity of the convention center, so entrance limitations have just started and more are expected for the high-level segment set to begin on Wednesday. Mayor restrictions will be applied to NGOs which reacted angrily to this and complained about being excluded from the process breaking one of the main principles repeated during the conference, “accountability, transparence and the role constructive and vital of civil society.” 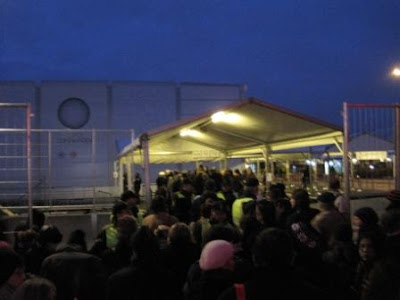 Meanwhile, negotiations continue with the same pattern as the days before, with fear, mistrust and suspicion having come to rule – particularly between industrialized and developing countries. Substantive work on the long-term cooperative action (LCA) issues has been suspended at different stages due to the “deadlock” between these two main blocks.
With Ministers already involved in negotiations, protests raised again among developing countries as only LCA issues were to be discussed at the ministerial level while Kyoto Protocol commitments by develop countries were not planned to have enough attention at the ministerial level. This was solved by the presidency leading to an agreement to hold informal consultations on “crunch issues” under both negotiations tracks. “It looks like rich countries wanted to wash their hands with regard their commitments” criticized a delegate of the African Union.